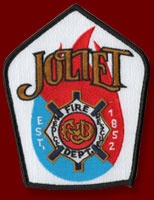 The Joliet Fire Department has had two patches over the years. Prior to approximately 1975, the JFD uniform had no patches. After this time, the red and white Maltese cross patch would come to identify the Joliet Fire Department for the next 25 years. The prevailing story on the origins of the patch is related to our neighbors to the north, Chicago . According to story, this patch was adopted because of its similarity to the Chicago patch.

In April 1997, a new patch was issued. The meaning of the new patch was best explained by Chief Lawrence Walsh, who was Chief at the time of the patch’s adoption. He indicated that “the Joliet in gold at the top of the patch denotes the new Joliet .

The center of the patch denotes the emblem that is on all of the fire department equipment. In the red and blue to the right and left of the JFD is the year the City of Joliet was chartered.” 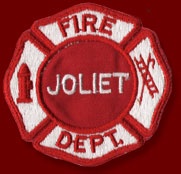 Medics: represents the emergency medical service aspect of the Joliet Fire Department. It represents all paramedics, EMTs, and first responders.

The red, white, and blue parallel denotes our nation’s flag and our heritage.

The red flame is associated with an emergency or other incident needing immediate attention, while the blue creates an image of confidence and self control. Finally, the shape of the patch is made to resemble the shield worn on the firefighter’s helmet.”