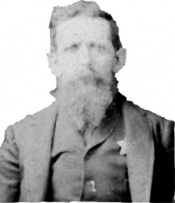 Constable DeLong was shot and killed while attempting to serve a warrant on a man. The man had been arrested by the constable several times in the past and had just returned to Joliet from Chicago.

Constable DeLong was notified of the man‘s return and went to the man’s mother’s home to arrest him. The suspect had previously stated that he would shoot the constable if he tried to arrest him again. When Constable DeLong entered the home the man shot him once, knocking him to the ground, and then shot him a two more times.

The suspect left the scene but then turned himself in later in the day. He confessed to murdering Constable DeLong and stated his only regret was that he hadn’t murdered his grandmother too.

On March 6, 1897, the suspect was convicted of first degree murder and sentenced to 99 years in prison. In 1924 he escaped but returned voluntarilly two years later because he said his conscience bothered him. He was paroled May 21, 1954, at age 81.

Constable DeLong had served as a constable for 4 years. He was survived by his wife and four grown children. 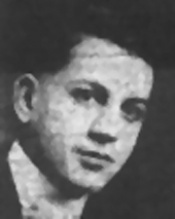 Sergeant Walter H. Weiss died of gunshot wounds suffered in attack when he was on foot patrol.

On April 7, 1924, Sergeant Weiss, along with two detectives, were patrolling the "bad lands" of North Scott Street, which was a thoroughfare lined with "soft drink" parlors and pool halls. Two suspects were loitering when they were approached by officers. The assailants then demanded a cigarette from the officers, who quickly ordered them to keep moving. The shooter turned, pulled a revolver, and opened fire on the officers. The first bullet struck Sergeant Weiss. Although mortally wounded, Officer Weiss pulled his revolver and returned fire at the fleeing offenders. One subject was captured immediately, and the second was taken into custody approximately one hour later, confessing to the shooting, and he was subsequently sentenced to death by hanging on October 31, 1924.

The death of Sergeant Weiss struck the Joliet community. Over $5,000 was received from businesses, doctors, lawyers, newsboys and many small children. The money was given to his widow and two small children, and the officers of the Department paid out of their pockets for his funeral so his widow would not have to bear the expense.

Sergeant Weiss had served with the Joliet Police Department for 2 years. He was survived by his wife and two children. 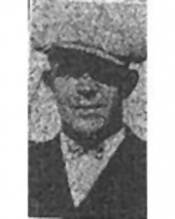 Detective John C. Murphy, 33, gave his life on September 18, 1927. Murphy, who had just made the rank of detective just two months prior to his death, was responding to a burglary alarm at the Oliver Hotel. Murphy and other officers entered the darkened hotel lobby and took up various positions to prevent the robbers’ escape. As the search began, Officer Schomig, near the staircase, heard two shots ring out, and immediately returned fire at the top of the stairs. A voice cried out, and the exchange of gunfire ceased. The first shots were fired by the hotel owner, who mistook Detective Murphy as one of the robbers.

Detective Murphy left a wife and infant son. He was described as one of the cleanest, squarest, and most courageous men on the force. 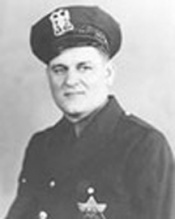 Louis A. Barney, 40, gave his life on August 8, 1954, after sustaining injuries from a traffic accident on August 3, 1954. Barney was riding his motorcycle on a special traffic detail for the Pageant for Progress. His motorcycle collided with the left rear fender of a vehicle traveling westbound on Jefferson Street. The driver was later ticketed for failing to signal a left turn. Officer Barney was able to walk to a vehicle and was taken to St. Joseph’s Hospital by an unidentified motorist. Once in the hospital, he fell into unconsciousness due to a subdural hemorrhage. Emergency surgery was performed to remove a blood clot from the brain, and remained in critical condition until he succumbed to his injuries.

Officer Barney was a WWII veteran and had been with his agency for 12 years. An avid sportsman, he carried the principles of the game into his police work. He often made friends of those he had arrested, and loved children. His two daughters were his constant companions. He was survived by his wife, two daughters, parents, and two siblings. 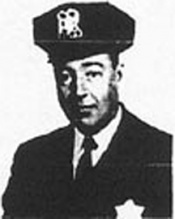 Detective Loscheider, along with other officers, was working on a stakeout of a liquor company in the 700 block of Broadway following information from an informant. After observing three men making entry into the business, officers were given orders to move in. The suspects quickly fled after spotting the officers, one of whom was apprehended immediately. A second officer was chasing the suspects when he lost sight of them. As Detective Loscheider approached the scene with his gun drawn in the darkness, the second officer did not recognize him. The officer ordered him to drop his gun. When Detective Loscheider didn’t comply, the officer fired from his shotgun, fatally wounding him.

The burglars were later apprehended, charged and convicted with murder for Detective Loscheider’s death.

Detective Loscheider is survived by his wife and daughter. Since his death, the Department organized the Police Athletic League and the field at Plainfield and Wyoming was dedicated in his memory. Detective Loscheider received 17 commendations, one of which was for rescuing a girl from a fire, for which he was most proud. 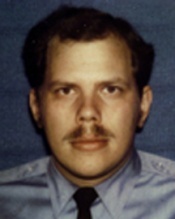 Patrolman Jeffrey Paul Hopkins died as a result of injuries received as he was escorting a funeral procession.

On September 23, 1975, Officer Jeffrey Hopkins was off duty in full police uniform riding a motorcycle that was equipped as a police motorcycle with red flashing lights and siren. He was providing a funeral escort that was sanctioned and approved by the City of Joliet and the Chief of Police. During the escort of the funeral cortege, Officer Hopkins stopped an individual for interrupting the funeral procession. He then attempted to catch up with the funeral procession, and was thrown off his motorcycle when struck by another car on Cass Street just east of Garnsey.

As a result of the impact, the motorcycle was overturned and Officer Hopkins was thrown to the street. Officer Hopkins sustained head injuries, despite the fact that he was wearing a helmet. He never regained consciousness, and died six days later. 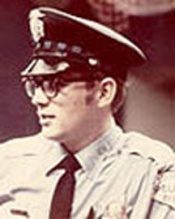 Officer Martin S. Murrin, 32, gave his life on September 12, 1984. Officer Murrin, along with his partner, were on routine patrol of the "Hill" area when they spotted a gang member with an open arrest warrant for aggravated assault. After a brief car chase, the suspect fled on foot with Patrolman Murrin in pursuit. The suspect was able to gain control of Officer Murrin’s gun and shot him five times.

The suspect was later captured in Mexico, extradited to Illinois, and sentenced to death. In 1996, he received a retrial based on a technicality, was found guilty of manslaughter, and sentenced to time served.

Officer Murrin received 13 commendations and letters of appreciation. He represented himself in a manner that other officers admired and set a perfect example of a Joliet Police Officer. He is survived by his wife, son and daughter. 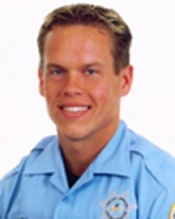 Officer Jonathan Walsh was killed when his patrol car was involved in an accident with a hit-and-run driver. He was responding to a burglar alarm at the Pilcher Park Nature Center.

Officer Walsh was pronounced dead at Silver Cross Hospital. He suffered massive injuries when he collided with a Chevrolet Blazer and then crashed into an unoccupied lift crane parked on the side of Maple Road just east of Briggs Street.

Police located the Blazer abandoned near McKay Street and Garland Court. Following a five hour manhunt, the driver was arrested and charged as was his spouse, for her involvement in reporting the vehicle stolen.

On Wednesday, July 27, 2005, the offender entered a guilty plea on charges of failure to stop after an accident and driving on a revoked license.

On Wednesday, December 21, 2005, the driver was sentenced to six months in jail and was taken into custody after sentencing. The sentence also included 48 months of probation.

Officer Walsh is survived by his father, a retired Worth police officer, his mother and two sisters.