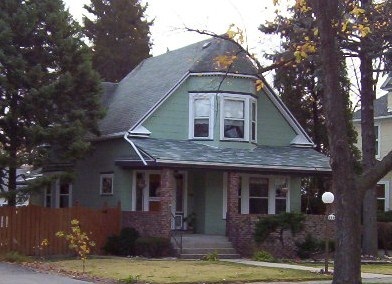 804 Western Avenue: The J.S. Hollinshead house, built ca. 1902, is a north-facing one-and-a-half-story Queen Anne featuring a front gable dominated by a trapezoidal bay window in the gable. The house has a full front porch on which a brick half-wall and brick columns were apparently added later. The front door has sidelights with leaded glass. The door is on the left (east) side of the front porch; a bay window occupies the right side of the porch. The east side features a trapezoidal bay below a peaked dormer on the upper floor. The house has a limestone foundation. A small outbuilding is located near the house; it appears to have been built at about the same time as the house. The garage, at the alley, is non-contributing.

805 Western Avenue: Located on the northwest corner of Raynor Avenue and Western Avenue, the church was built of Joliet limestone ca. 1925 in the Collegiate Gothic style. The original portion of the building is three stories capped with a steeply-pitched gabled roof with slate or slate-like shingles. The prominent gables are integral to the exterior walls and are likewise of Joliet limestone. Stone headers cap the many 1/1 double hung windows, each having large transoms. The sanctuary has many arch-topped stained glass windows with gothic stone frames. The east-facing sanctuary has a one-story parapet on the south side running between an east entrance on Raynor Avenue and the rectangular belltower on the west. The more recently built two-story west wing is of brick which echoes the color of the limestone but does not attempt to duplicate the artistry and detail of the original building. 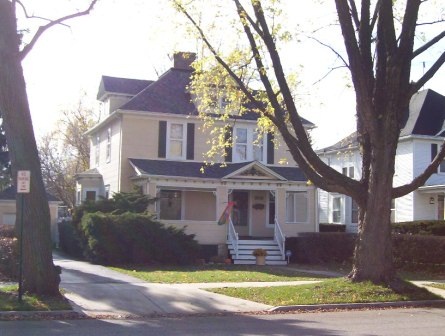 806 Western Avenue: The O.O. Clark house built ca. 1905, is a north-facing two-story Colonial Revival four-square with a flat-topped hip roof with three dormers. The full front porch has decorative brackets on the fascia and a large gable over the entry stairs with decorative wood carving on its face. Decorative brackets are arrayed under the main roof. The building is shingle sided and has a limestone foundation. 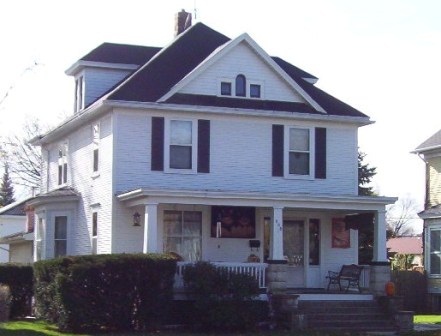 808 Western Avenue: The Wallace L. Hardy house built ca. 1905, is a north-facing two-story four-square with clapboard siding and a trapezoidal bay on the east side on the first floor. The building has a hipped roof with the ridge running north-south. East- and west-facing dormers have small hipped roofs; the large front- (north-) facing dormer has a gable that dominates the front roof profile and features a small palladian-style attic window. The full front porch has rectangular columns rising from rail-height brick pillars; the entry door has sidelights and is on the right (west) side of the porch. A small outbuilding is located near the house. A garage, roughly contemporaneous with the house, faces north and is accessed by a driveway onto Western Avenue. 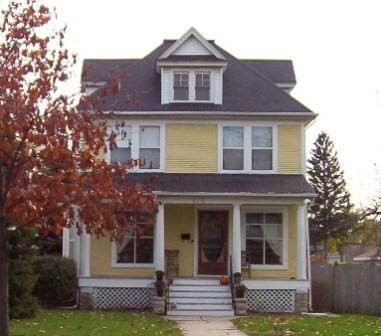 810 Western Avenue: The Daniel J. O'Connor house, built ca. 1907, is a north-facing Colonial Revival two-story four-square with a flat-topped hipped roof and three dormers. The entry door is slightly off center and offset from the center stairs to the full front porch. There is a bay window on the first floor on the east side. The building has a limestone foundation. The garage on the alley is non-contributing.

811 Western Avenue: The Frank L. Keip house is a south-facing one-and-a-half-story Dutch Colonial built ca. 1903 with gambrel roof, front gable, and full front porch. This house has a limestone foundation and two bay windows on the west side, one of which rises to the second floor and supports a large dormer with west-facing gable. The entry is slightly off-center to the left. The garage appears to have been built at about the same time as the house.

812 Western Avenue: This house is a north-facing two-story Prairie four-square built ca. 1908 with clapboard siding and a full front porch with rectangular columns. The house apparently underwent renovations which resulted in the removal of front-facing windows on the upper façade; otherwise, the house appears to be largely intact. The west side has a raised bay which accommodates the mid-landing for interior stairs. This bay features a cone-shaped underside. The garage is non-contributing. 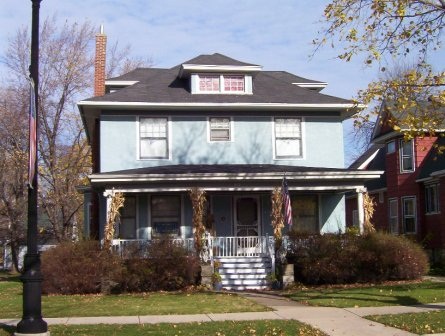 813 Western Avenue: The Dr. William McBride house is a south-facing two-story Prairie four-square built ca. 1904 with a full neoclassical porch. This stucco house has a hipped roof with three dormers, a center entry, and a trapezoidal bay on the left (west) side of the front porch and another on the west façade. The garage is contributing. 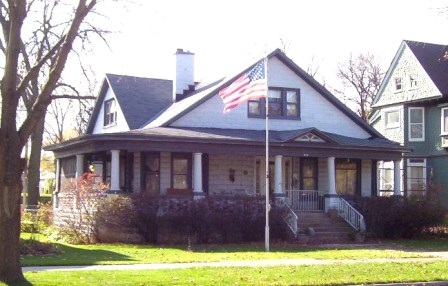 814 Western Avenue: The L.B. Mather house is a north-facing one-and-a-half-story Neoclassical bungalow built ca. 1911 with a front-facing gable and two large side-facing dormers. The house is constructed of painted concrete blocks made to resemble limestone blocks. The full front porch wraps gracefully around to the east side; the porch roof is supported on six turned stone columns. The garage on the alley, constructed of the same concrete blocks, is contributing 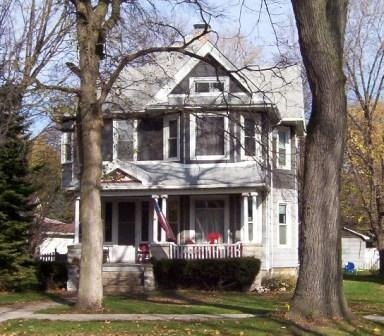 815 Western Avenue: The J.J. Wellnitz house built ca. 1905, is a south facing Queen Anne with neoclassical elements such as three sets of double columns supporting the porch roof, and a small gable over the entry stairs. The house has a trapezoidal bay on the east side of the front porch which rises to the second floor and is topped by a front-gabled dormer in the attic. The entry door is on the left (west) side of the porch. The house has a limestone foundation and shingle siding. The aluminum-sided garage appears to be contemporaneous with the house. 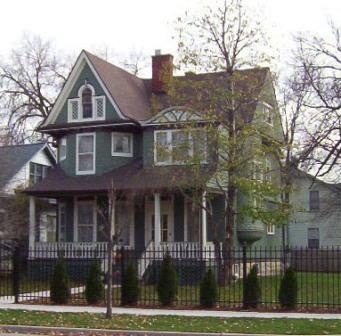 816 Western Avenue: The A.E. Dinet house built in 1899, is a north facing two-story Queen Anne with an el-shaped roof with north and west facing gables and the chimney in the crotch of the el. The north gable features a neoclassical palladian window. The first story is sided in stucco; the second story and the gable faces are shingle-sided. The full front porch has a trapezoidal bay window on the left (east) continuing up through the porch roof to the second floor and supporting the attic gable. The entry door is slightly offset to the right. The west face features an oval bay midway between the first and second floors to accommodate the mid-landing for the interior stairs. It has a domed underside and a large, plain 1/1 sash window. The house has a limestone foundation and a contributing garage. 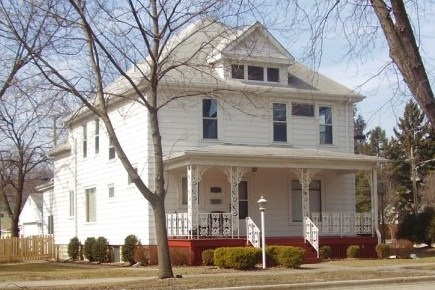 257 Raynor Avenue: The George and Cora Snapp House is a 2 ½ story, American Foursquare style structure built on a Joliet limestone foundation in 1911. The structure is distinguished by a steeply pitched hip roof with front, projecting dormer. The exterior has been modified with the addition of steel siding and wrought iron posts and railing on the open front porch. The structure is part of the Raynor’s Addition Thematic District, 1870’s Subdivision. 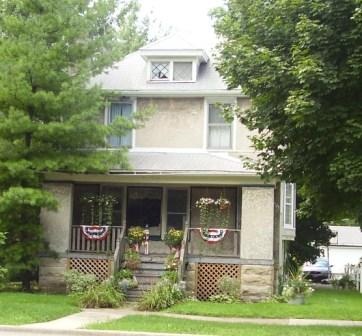 255 Raynor Avenue: The Thomas and Julia Egan House is a 2 ½ story stucco, American Foursquare/ Prairie style structure built in 1912 on a Joliet limestone foundation. The house is distinguished by a hip roof with a front-facing hip dormer and a full-width, open front porch supported by a pair of oversized square stucco columns and a horizontal wood trim band at the second story level. Both features contribute to the Prairie style. The structure is part of the Raynor’s Addition Thematic District, 1870’s Subdivision.
View Full Site