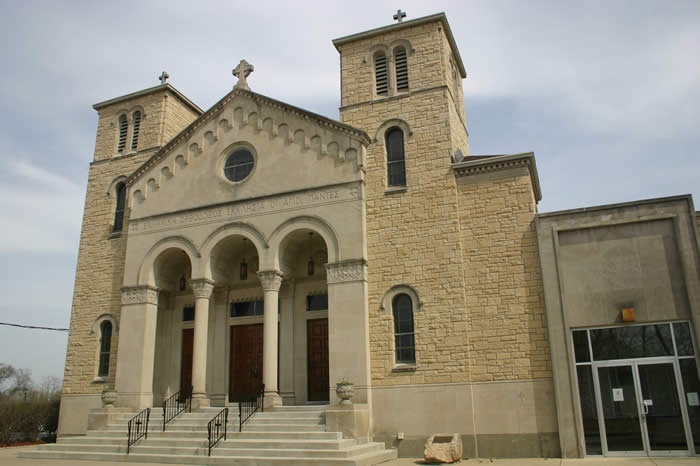 The All Saints Greek Orthodox Church is a west-facing, two-story, Romanesque-Byzantine Revival style church built on a poured concrete foundation in 1942-1945. The front façade of the church consists of cut-face limestone and random-coursed Joliet limestone. The school’s façade is Ashlar Indiana limestone. The façade is distinguished by three Romanesque arches that support a cut-face Indiana limestone pedimented church portico topped with a large Greek cross, and framed by two tall hip-roof bell towers likewise topped with Greek crosses. The bell towers are faced with Joliet limestone. At the top, the bell towers each have a pair of Romanesque-arched wood-louvered openings separated by a center column. Each window has a cut-stone arch and sill. The pediment is decorated with large arched dentils and a centrally placed round multi-light wood-framed window. The two front columns are cut stone and topped with Byzantine-detailed capitals with Byzantine frieze work intertwined. Beneath the pediment is a band below which is an inscription in Greek which reads, in English, “All Saints Greek Orthodox Church." Monumental stairs spanning the portico rise eight steps above grade and have two sets of wrought iron handrails. A two-story, circa 1963, school/cultural center addition adjoins the church on the south.

A two-story house located at the site was remodeled in 1916 and served as the original church for the congregation in Joliet. The house was razed in 1942 to accommodate the present church.
View Full Site