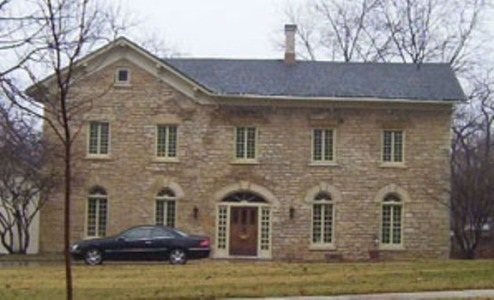 The Campbell/Strong house, constructed between circa 1845 and the late 1850's, is an example of Joliet's early limestone housing, which was constructed primarily of the native limestone in the area. Started as early as 1845, the house grew over the years with changes in ownership. The earliest portion of the structure is the north wing. The southern wing was added later, and shows all the styling of the late 1850's Italianate. The bracketed roofline and low-pitched gables reflect this.

Barbara Campbell, the first resident of this home, was responsible for the first platted subdivision of the vast Campbell holdings. By 1865, Charlotte Strong purchased the tract of land now known as The Upper Bluff Historic District. She laid out the streets and named them for her family members. By the early 20th century, the front yard of the house was sold for new construction, and the house once again changed. The entry was moved to the west façade (in its present position) and Colonial Revival elements, such as the entry with fan transom and sidelights and the round-topped windows, were added with that remodeling. This structure is now a single-family home. The structure is a Local Landmark and is part of the Upper Bluff National Register District.