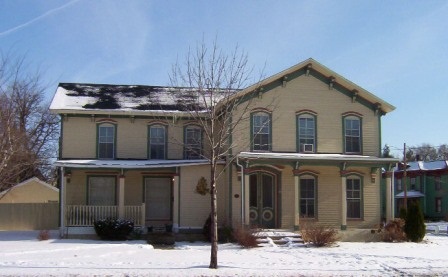 The Henry/Folk House is a 2-story Italianate style, wood clapboard structure built on a Joliet limestone foundation in 1864. The structure is dominated by a full-width, 1-story, open front porch, supported on square posts and Italianate brackets. The main façade has a large, double door entry with arched top. The one-over-one double-hung sash windows exhibit matching arched tops on the main and secondary façades. The structure is topped with an end-gable roof decorated with Italianate corbels. The home has a trapezoidal sunroom and a small Italianate porch on its side façade.

The structure is a Local Landmark and is part of the East Side National Register District, and was nominated for its architectural and historical significance. Historically, it was the first home of Jacob Henry, who designed and built railroads here in Joliet. In 1873, Henry's daughter and son-in-law, Dr. and Mrs. Folk, took up residence in the house. Julius W. Folk was a contractor who worked with Mr. Henry, and in 1871 he married Helen Henry. J. W. Folk was a stockholder and on the board of directors of the Will County National Bank. In 1869, an $800 addition was made to the structure.