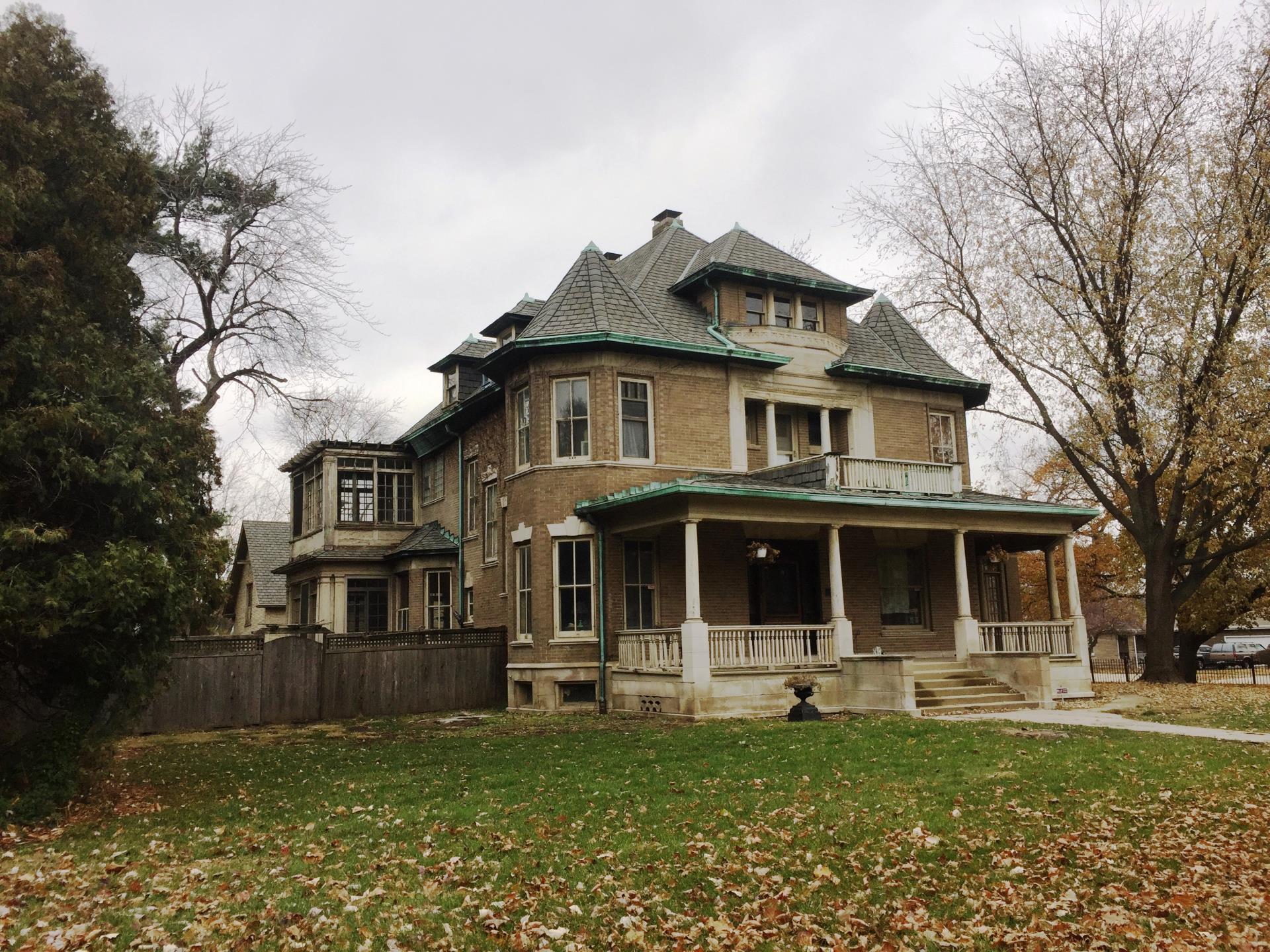 The home at 903 Western Avenue is significant for its architectural style and its association with the renowned Chicago architect William Carbs Zimmerman and nationally renowned prize fighter Patrick “Packey” McFarland. It is a two-and-a-half-story Queen Anne style home with masonry walls comprised of brick and stone, classical features and elements of the Beaux Arts style. Elements of the Beaux Arts style include the use of light-colored smooth stones and stonework with detailed etching, a recessed balcony, and two stone balconets. Other important features of this home include the Queen Anne Style wrap-around front porch with classical features, two-story enclosed porch on the western elevation and one story solarium on the east elevation. The house retains its original windows and storm windows. The size of the home and the lot, being on a prominent corner lot and being one of the largest lots in this area, also contribute to its architectural and historic context.

William Carbys Zimmerman, a renowned Chicago architect designed this home for Michael F. and Sarah A. Loughran. Carbys Zimmerman was born in 1856 in Thiensville, Wisconsin and was a graduate of MIT. Zimmerman began his career as a junior partner at John J. Flanders. He became a fellow of the American Institute of Architects and worked in the same circles as Louis Sullivan, Frank Lloyd Wright and Daniel Burnham. His early work includes mansions in the Rogers Park, Kenwood and Edgewater neighborhoods of Chicago and several mansions in Evanston and Lake Forest including the Swift estate and Col. Hosmer Morse. In 1905, he was appointed the Illinois State Architect, acting as the official architect of Illinois for ten years. Commissions during that time include the Illinois State Supreme Court building in Springfield, much of the University of Illinois campus in Champaign-Urbana, and Stateville Prison.

Of secondary significance is its association with the same prominent Joliet family for over 60 years and its association with prominent local businessman Michael F Loughran. The house was constructed for Michael F. (1844-1914) and Sarah A. Cassidy Loughran (?-1930) in 1898 and was designed by William Carbys Zimmerman. Loughran's wife, Sarah Cassidy, wished to move away from the bustle outside their home on Ottawa Street, so her husband decided to build a home unlike any other in Joliet and place it on Western Avenue. Sarah desired to have no neighbors, so their new property took up an entire city block, stretching from Western and Prairie, to Western and William and Buell back to Prairie. At one time, the estate boasted of a 3 par golf course, in-ground pool, orchard, formal gardens and a fully functioning farm with game hens, turkeys and horses (Victor Red and Victor Blue). The home had several live-in staff including Bessie Harris (cook), her sister Tessie Harris (maid), chauffeurs Charlie Wilkinson and John Harris, and nurse Nellie Oaks.

Michael Loughran emigrated from Ireland and arrived in Joliet around 1875. He first worked at the Joliet steel mill. Michael and Sarah married in 1876. By 1879, he switched to the real estate and the insurance industry. He quickly became known as a shrewd real estate buyer and operator in Joliet. Michael was also involved in stock at the Joliet National Bank, head of the Pure Ice Company, Joliet Warehouse and Transfer Company, Grocers Baking Company and M.F. Loughran Real Estate. He built the Loughran Building at 1 East Cass Street and the Eagle building at 9 E. Cass Street.

Michael and Sarah lived here with their four children: Anna F., Francis, Margaret E. and Louise A ./ Agnes L. The property originally took up an entire block, holding the house, an orchard, a one-hole golf course, farm area with a barn and much more. Michael passed away in 1914 and Sarah in May of 1930. The family also employed two servants who lived on the third floor of the home.

A few months after Michael’s passing, his daughter Margaret E. married Patrick “Packey” McFarland and they resided in the house with Margaret’s mother Sarah. Patrick “Packey” McFarland, a renowned prize fighter, was known as one of the best fighters to never become a world champion in boxing. He took over the family business of Porter Brewing and Citizen's Brewing. In 1921, Margaret Loughran-McFarland (Michael's daughter) hired the decorating team at Marshall Field and Company to revamp the interior of the home. Renovations included elaborate custom wrought iron gates to divide the front and back parlor inside the house. The gates were made with tiny iron shamrocks to denote the family's  Irish heritage (gates have been removed). The decorators changed out the lighting in the home which would have been gas and/or gas and electric, to electric. There remains one original Marshall Fields fixture on the second floor hallway - it too has shamrocks. Other changes included adding electronic sconces in the bedrooms. (Source Margaret McFarland Haley). The McFarland’s made many additions to the homestead including a state of the art in ground swimming pool and a pair of playhouses for the children. The playhouses had murals drawn/painted inside of them by famous cartoonist Bud Fisher, the creator of Mutt & Jeff.

Many important events happened at the home while Packey lived there; also many important people were known to visit. In 1933, the Cardinal, bishop and many other dignitaries met at the home to order the official transfer of De LaSalle High School from the Christian Brothers to the hands of the Carmelite Brothers, who renamed it Joliet Catholic High School (Source Margaret McFarland Haley). Roughly the same time, world famous Irish tenor John McCormick performed at the home to an audience of several dignitaries (Source Margaret McFarland Haley and Wikipedia). Another notable visitor to the home was movie star Kay Francis, who was the highest-paid actress in Hollywood between 1930- 1936 and number one female star at Warner Brothers (Sources Margaret McFarland Haley and Wikipedia). Actors/boxers Max and Buddy Baer were also close friends of Packey as well as baseball legend Babe Ruth (Source Margaret McFarland Haley). In 1933, Governor Henry Horner appointed McFarland head of the Illinois Athletic Commission. McFarland died of strep at his home in 1936. Several thousand people attended his funeral at Saint Raymond's including Illinois governor Henry Horner.

This house and property remained in Loughran-McFarland family until 1962. In 1962, the property was subdivided into 5 separate lots, with the original home taking up the largest lot, and sold off. At 0.56 acres, the property is still one of the largest lots in this area. The house was sold to Terry and Sara Rini Aversa that year. The Aversa family raised their family in the home until 1996. In 1996, the Aversa’s sold the home to Mary Kathryn “Kate” McInnes Woods and her husband Peter Woods, who owned the property until 2014-2015 when it fell into foreclosure. The home remained on the market until May of 2017 when Mary Beth Gannon and her husband James Francis Keegan purchased it