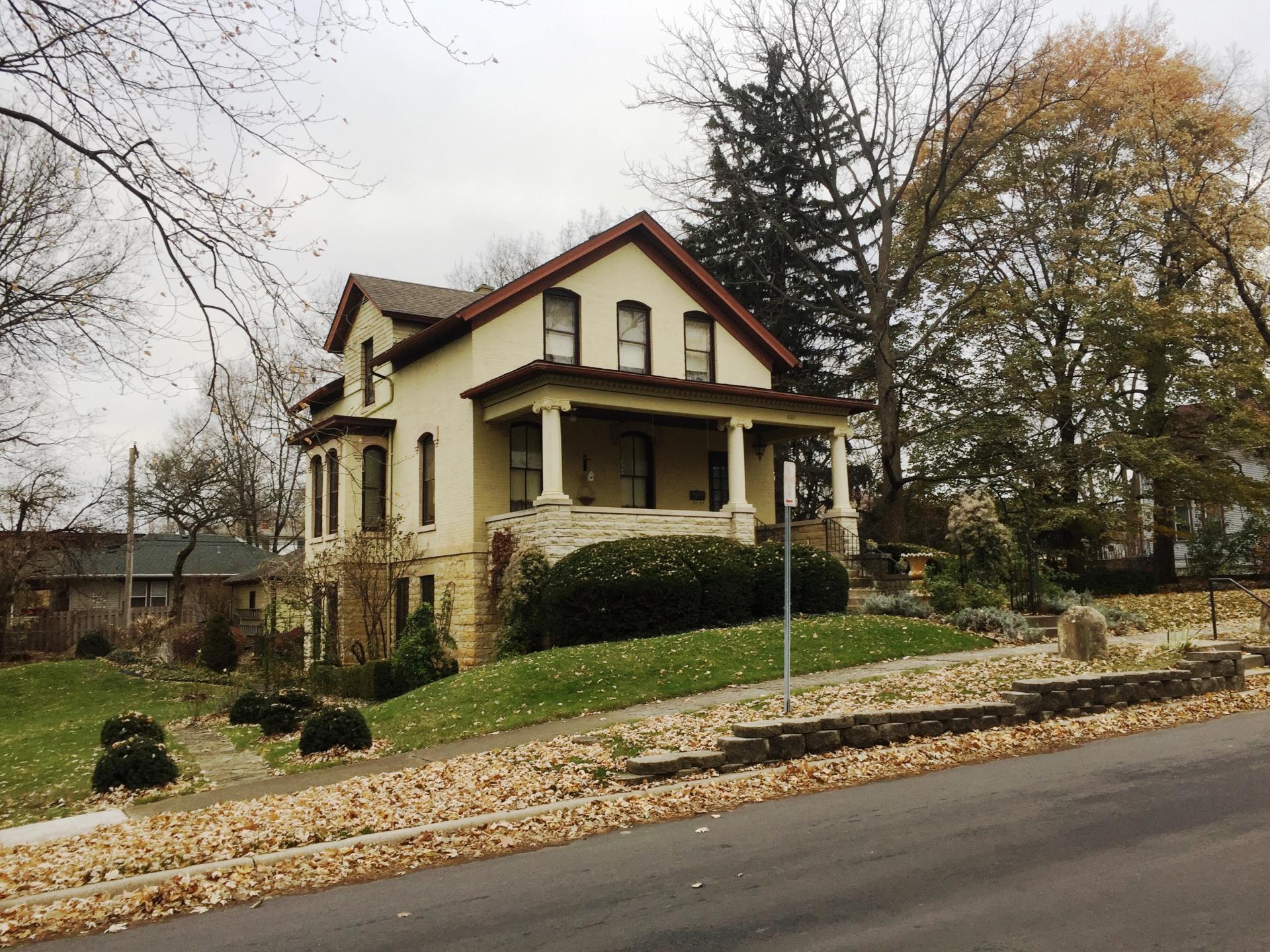 601 North Center Street is significant for its architectural style. The 1 ½ story, front gable, Italianate style house has multi-wythe brick masonry walls (painted in the 1930s), an asphalt roof and a high limestone foundation, which is a unique feature of this house. There are also few brick, single family homes in Joliet that were built prior to 1900. A defining feature of this house is the Italianate style bay window on the southern elevation, which appears two stories in height because the bay extends downward to the basement below. Another defining feature is the classical style porch with a flat roof supported by pedimented, rounded ionic columns. This porch was added some time between 1924 and 1955, according to the Sanborn Fire Insurance maps of those years. The front door is paneled with lights. The porch rests on a limestone foundation. The tall arched windows with brick hoods are another defining feature. The house has retained most of its original two over two wood windows. The dormer windows were likely added in the early 1900s.

The house is located on a large corner lot with 0.44 acres, which is unique for this area of Joliet. The property slopes to the south and the house is built into this slope, causing the house to appear two-and-a-half stories in height from its southern elevation. The large property includes two hitching posts, root cellar, limestone sidewalks, mature trees and landscaping. It is in close proximity to the Sehring Mansions on Bridge Street.

The period of significance for this home is 1862-1955. The 1862 Map of Joliet shows a house at this location. The Italianate style became popular starting in the 1850s so it is likely the same home. The classical style front porch was added prior to 1955 according to the 1955 Sanborn Map, which was the last major alteration of this home.

Research identifies the Moran family as residents of this house as early as 1872. The 1872 Will County Business Directory shows that a Michael Moran lived at the corner of First (renamed Stone) and Center Streets. Michael J. Moran was the superintendent of the Joliet Gas Company (Citizens’s Gas Company). His father, Thomas F. Moran, previously held this position. Michael Moran was politically involved and served as alderman of the Third Ward in 1888. The Moran’s were of Irish descent. Thomas Moran immigrated to America from Ireland in 1851. Michael Moran’s sons John, Thomas and William also lived here in 1884 and all worked at the gas company. In 1896, children Anna L. Moran, Emma Moran, George Moran and William Moran also lived here. The name of Michael Moran’s wife and mother of the children has not been determined. The Moran’s lived here until 1896-1898.

Of secondary significance, the home was in continuous family ownership for over 70 years through the Hammel and Leser families. The 1898 Polk Street Directory shows that the Nicholas (1837-1921) and Margaretha Hammel (1851-1932) family and their eight children lived here. The couple both immigrated from Germany. Their children included: Margaretha T. (Cox), Fred P. Hammel, Joseph A. Hammel, C. Alvina (Leser), Henry F. Hammel, Victor F. Hammel, John Hammel, and Sophia Hammel. Nicholas passed away in 1921 and Margaretha in 1932. Both are buried at St. John’s Cemetery. A deed shows that the Peter and Mary Schmitz family owned the home from 1897 to 1909, but the couple did not appear to ever live here. Margaretha Hammel was Peter Schmitz’s sister and he sold the house to her in 1909.

Sophia Hammel inherited the house 1934 after her mother’s passing in 1932. Sophia worked in various administrative positions including a book keeper and stenographer at her brother H.F. Hammel’s law office in downtown Joliet. Sophia passed away in 1960.

This house remained in the Hammel family for over 70 years. Henry J. Leser married Nicholas Hammel’s daughter Alvina “Christina” Hammel. The couple and their five children lived here with Sophia as early as 1920. Sophia was lovingly known as aunt “Fife.” The Leser children included: Henry Jr., George, Leo F., Clare C., and Bernadine. Leo F. died in 1945 while in service in Japan. Clare C. passed away in a civil service plan crash in 1948. Henry Leser Sr. reportedly lost his job during the depression and his wife turned the basement furnace room into a bakery. Their children would deliver the baked goods to nearby households. In the 1960s, with their household being smaller, the Leser’s rented out two “bachelor” rooms on the basement level. The Leser’s are attributed with painting the home’s brick facade.

Kay and Leroy Pemble purchased the home in 1972 from George Leser and Henry J. Leser Jr. Prior to 1938, the house was numbered 1001 N. Center Street.