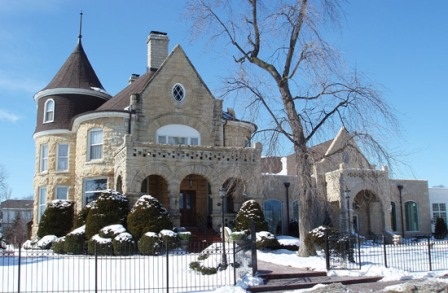 The Patrick C. Haley mansion is a three-story Richardson Romanesque structure built in 1891 by F. S. Allen, a nationally known architect who made spectacular use of locally quarried limestone. This building has a limestone block foundation and rough-faced limestone block walls. The front façade has a central entry door surrounded by a large stone portico with five archways, three in the front and one on each side, typical of the Romanesque style. To honor Mr. Haley's Irish heritage, Gaelic insignias were cut into the stone on the front porch. There is also a three-story windowed tower with a conical roof, and an oval stained-glass window depicting the likeness of Mr. Haley.

This landmark is nominated as a fine architectural example of Richardson Romanesque style. Due to high construction costs, these examples are very rare. Mr. Patrick Haley was an active politician who served as City Attorney, Ward Alderman, and Mayor of Joliet. The Haleys entertained lavishly, and their guest lists included many politicians, city founders, and newspaper publishers. In past years, the Haley home had been used a funeral home, and it currently serves as a banquet and special occasion facility.