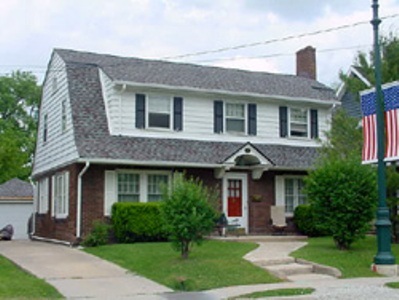 The L. A. Stansbury/Rubens House is a 2-story brick/frame Dutch Colonial style structure built in 1923. The structure has a centrally placed single entry door and projecting shed dormer on the second level and is a fine example of the style in its original condition.

The Stansbury/Rubens home was nominated for historical significance, as it was the first home of Maurice Rubens. Mr. Rubens was the Secretary-Treasurer for the Royal Theater Company and later the Manager for Rubens Rialto Theater. Maurice and his brother Louis were largely responsible for the construction of the Rialto Theater, built in 1926 at a cost of $2 million. Maurice is also known for his discovery of Lois Delander at the Castle Dancing School in 1927. He persuaded her parents to enter her in the Joliet beauty pageant, which she won. Miss Delander later went on to win the Illinois pageant and one of the first Miss America pageants. Maurice and Lillian Rubens lived in the home from 1929 until 1942.