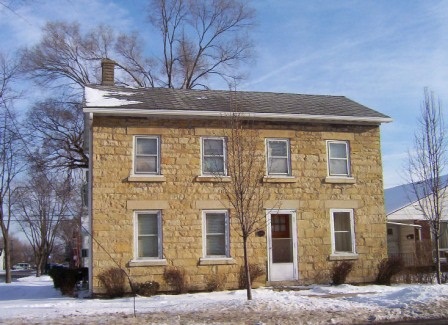 The Wagner House is a two-story, Joliet limestone, Greek Revival/Vernacular style structure built in 1850 on a Joliet limestone foundation. The residence was built by a German immigrant stone cutter who utilized rough-cut coursed ashlar limestone from a nearby quarry to construct the home. The structure has an asymmetrically-placed front door and is distinguished by evenly-placed, one-over-one double-hung sash windows on the first- and second-story levels. The windows have stone lintels and sills. The side gable roof is embellished with a lunette in the gable.

The Wagner home is one of Joliet’s oldest residences, dating back from the early 1850’s. It was landmarked for its architectural significance. Constructed of Joliet limestone with 25” thick load-bearing walls and foundation, this Greek Revival structure is a testimonial to the craftsmanship of the stone cutters of the period. The original owner was a stone cutter working in the area. An addition was built on the rear of the home at the turn of the century. The garage at the rear of the property was originally a residence built around 1900. Its lot, facing a side street, was later merged with that of the Wagner Home and the building was converted to a garage. The structure is a Local Landmark.