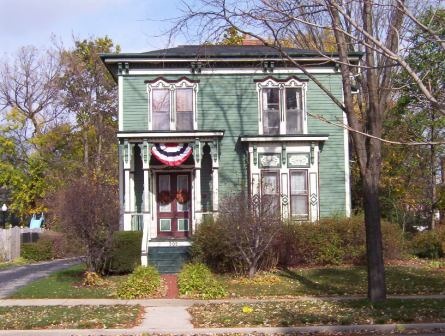 The W. A. S. Brooks House is a 2-story, wood clapboard, Four Square/Italianate style structure built in 1875. The structure exhibits heavy Italianate incised and applied detail in the front porch and front bay window and in the twin-peaked window hoods on the second story level. This house was the first house constructed in the original Joseph Campbell estate subdivision. Nominated for its architectural style, the Brooks house is a striking example of Italianate design, revived in the mid to late 19th Century. Several front steps lead to double doors on the covered front entrance porch. The porch has spindle railings and bracketed and detailed columns extending between its roof and rail. This structure, with flat Mansard roof, long straight vertical lines, and an abundance of architectural detail, has a very distinct look. The home is painted in several colors and hues to highlight all its details. Charlotte Brooks, who designed the subdivision where this home is located, resided in this home. The structure is a Local Landmark.