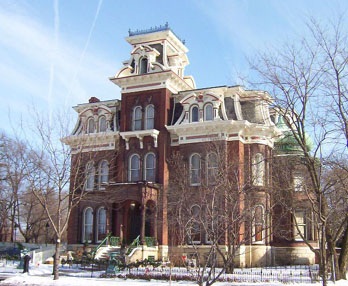 The Jacob A. Henry Mansion is a three-story, red brick, Second Empire/Italian Renaissance style structure built on a Joliet limestone foundation in 1873 (completed in 1876). The structure is set on bedrock and the entire basement floor is made of Joliet limestone from the building owner’s quarry. The walls of the structure are constructed of red Illinois sandstone and deep red brick specially fired in Ohio (wrapped individually and shipped by barge to Joliet). A commanding three-story tower is the focal point of the structure.

The structure has steel trim with slate shingles on a mansard roof. The front and side porches are single slabs of limestone. The largest stone ever quarried lies in the sidewalk under the front entry gate. The stone is 9’ x 22’ x 20” thick. In 1885, an immense Byzantine dome was added to the south façade.

The interior of the mansion has elaborate polished walnut woodwork, massive carved pocket doors, original wood mantles, and a solid walnut staircase. The original owner, Mr. Henry, was a railroad magnate, building railroads in Indiana, Ohio, and Illinois. He had ownership in a local quarry and was a principal stockholder in Will County National Bank. The structure is a Local Landmark, part of the East Side National Register District, and individually listed on the National Register.

The home is available for banquets and special occasion parties.