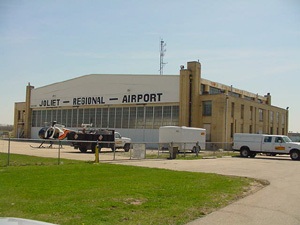 The Joliet Park District Airport Hangar is a unique and symbolic landmark. In 1930, the Joliet Park District constructed this structure in a contemporary style by incorporating elements of Art Deco with Streamline Moderne. The building's exterior has remained unaltered and is a rare and notable example of this architectural composition.

The history of the Hangar reflects the "Progressive Era" in Joliet government. The scale and use of the Hangar were significantly forward-thinking in 1930. Joliet's public undertaking of this facility was exceptional during the infancy of the aviation industry. In fact, the Hangar initially opened with amenities that would become commonplace in all airport terminals: waiting areas, luggage collection, offices, a restaurant with dining room and viewing terraces. Not surprisingly, the Hangar and airfield opened with much fanfare and excitement in 1930.

Old Photos of the Airport