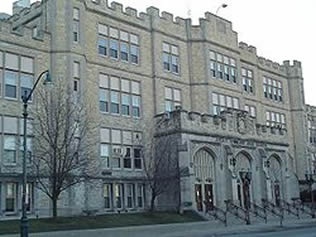 The 1901 Joliet Township High School is an early yet accomplished example of the "Collegiate Gothic" style that became increasingly popular throughout the early 1900's. This is evident in this building's arches, castellated walls, and towers. Joliet commissioned local architect F.S. Allen for the 1901 southern portion of the high school. Mr. Allen went on to employ this styling with many schools nationwide. The D. H. Burnham Company, in 1917, 1922, 1924, and 1931, completed four subsequent additions. These additions continued the original theme with slight variations, while the original F.S. Allen section contains the most detailed and architecturally interesting components of the entire composition. In total, this impressive and well-maintained structure harmonizes with and dominates its location by serving as both art and institution.

Constructed of Joliet limestone, the high school is an exceptional structure. The school has also played an important role in serving the community. Considering both its structural presence and the educational innovations and social events that it has fostered, Joliet Township High School recognizes and honors the people and accomplishments that the building has housed. Of greatest national significance, the Joliet Township High School was home to the nation's first Junior College. On a local level this structure has well served the community and has provided for the educational and social development of its youth for the past 100 years. The historic role of this landmark harmonizes with its architectural aspects. Joliet Township High School is a compilation of form, function, and history that draws and commands respect and admiration.