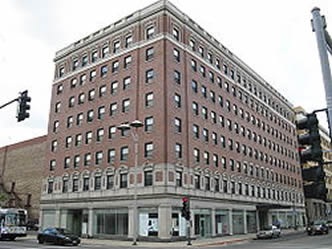 Built in 1927, the Louis Joliet Hotel is an eight story neoclassical revival building in brick with stone trim. It is located at the southwest corner of Clinton and Scott Streets in downtown Joliet. In its heyday, this was the finest hotel in Joliet, and well-regarded throughout the region for its elegance and luxury. It was designated a national landmark in 1989. Except for minor modifications to the street level façade, the building remains intact.

The hotel has 225 rooms above a two-story central lobby and lounge, the latter containing a large fireplace with an eight-foot hand-carved mantel of Bedford stone.

The hotel operated until 1964, after which it became known as the St. Patrick's Residence, a retirement center and nursing home, until 1989. The building has been vacant since then.