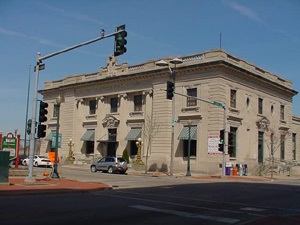 Designed by James Knox Taylor and constructed between 1901 and 1903, the Old Joliet Post Office exhibits a blend of architectural styles, and can be categorized as Renaissance Revival. The exterior is light-colored limestone with granite entrance steps. The entry is covered by a canopy between two of the four two-story fluted ionic columns at the front of the building. The building is topped by a balustrade above the cornice.

The building was expanded in 1931/32 at the rear; the front façade remains as it was when originally constructed. The Old Post Office was designated a national landmark in 1981.